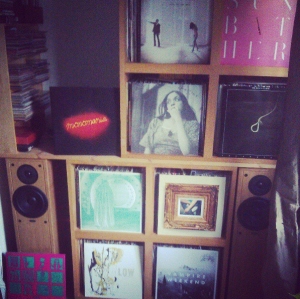 Here’s the list of my albums of the year for 2013. I’ve had no problems whatsoever compiling this list as it features the only 11 new records I actually bought over the last 12 months.

My listening habits have changed a lot over the last year and Spotify is now my first reference point for genuinely new music, i.e. artists I haven’t heard before. This year i’ve spent much less money than usual on records, but that’s not because streaming has replaced purchasing. If money had been no object, I would have three or four times as many, and there’s a parallel list of albums which i’ve had on heavy Spotify rotation.

This list almost breaks down evenly into albums by established and well-loved artists which I would have picked up whenever I got the chance, and albums which I played so many times on Spotify that I felt either compelled or obliged to buy them.

Finally, I feel no sense of conflict or confusion as to why i’m writing this list. It’s because I want to and because, in some tiny way, I want you all to know that I’m the kind of guy who would buy these kind of records.

I love the idea of Black Metal – a blast of noise and fury as cathartic and destructive as a nuclear detonation, channeling pure, dark rage and horror. But somehow, the product usually manages to undermine itself through the sheer puerility of everything which isn’t the music. In their titles, artwork, lyrics, names, so many BM acts seem just like silly, gloomy teenagers. I can’t get past it.

That leaves me with acts that eschew the posturing and just go for the noise. This year, that has meant Deafheaven, a black metal band who grew up loving Slowdive. ‘Sunbather’ is a red-roasting racket, without any other nonsense.

More or less a standard new Deerhunter record, which shouldn’t even be a thing. Regulation Deerhunter is okay for me and listening back I’m surprised by how many of the songs seem to have stuck. But, Bradford, fuzzing up your vocals and pretending you’re wearing a neon motorbike jacket is not a bold new direction.

Grouper – ‘The Man Who Died In His Boat’

Grouper may be one of my favourite artists of the last few years. I can tell, because I have almost no idea whether I like her records or not, but I keep on coming back to them. And the more I come back, the more my grip on them seems to slip. ‘The Man Who Died In His Boat’ seems to hide its true identity under layers of gauze and haze, layering static, hiss, reverb and any other available aural opacifier between the listener and what seem, beneath it all, to be simple acoustic laments. But there’s nothing simple about this proposition.

All of which is a windy way of saying that no matter how many reviews I read telling me that this album is a moving evocation of loss, wrapped in a narrative that will have you wrung out by the closing track, I basically have no idea on earth what it’s about, can barely cling on to the details of any of the tracks, but it hasn’t stopped Grouper nagging away at me, and I love that.

My Christmas list is stuffed full of records i’ve lived with on Spotify and now need to own. Almost all are abstract, electronic – in influence if not always execution – and, to my inexperienced ears, representing a vanguard of new musicians stepping away from the dance floor and towards the contemporary classical performance space. Bobby Krlic, aka The Haxan Cloak, is pushing downwards, finding ways to drag the sounds out from the depths of his psyche and into a world in which they may well never have been meant to exist.

Pure nostalgia, pure pleasure, ‘Pearl Mystic’ proves that just because something’s been done before doesn’t mean it isn’t worth doing again, or that it can’t be done better. It’s a bubbling, seething cauldron of guitar that will boil you down to bones.

I wrote about it here: http://devonrecordclub.com/2013/10/30/hookworms-pearl-mystic-round-56-robs-choice/

Iron and Wine – ‘Ghost On Ghost’

Sam Beam’s fifth album begins with a clattering, uncontrolled rhythm, rolling over itself before resolving quickly into a sweet, soulful shuffle. It’s a knowing dig at those who thought he would take Iron and Wine even farther down the discordant jazztronica of ‘Kiss Each Other Clean’. I thought that last record was unfairly maligned but, nonetheless, this unmistakeable step back towards the heart of what he does best has produced a warm and wonderful sound. It’s confident, brimming with effortless melody and open-hearted words. Amidst the noise and anti-noise of all my other 2013 playlists, the rhythm and roll of ’The Desert Babbler’ has perhaps been the most naggingly addictive pure sound.

The Knife – ‘Shaking the Habitual’

This triple-album, an unashamedly conceptual piece, whichever way you see its intent and execution made a big impact on release. It seems to have dipped below the waterline since. Perhaps it was too big to digest. Perhaps it was too ridiculous to take seriously. Whatever. There are sounds in here that you’ve never heard before. There are tracks which hammer and bang like nothing else you’ll have nodded your way through this year. There are places on this record which only The Knife have access to.

Low and Jeff Tweedy made a lovely Low record, moving the sound on incrementally by combining the succinctness of ‘Drums and Guns’ with the accessibility of ‘The Invisible Way’ to create a smart, thoroughly enjoyable collection. I’m not damning it, and that’s not faint praise.

Nick Cave and the Bad Seeds – ‘Push The Sky Away’

This was on hard rotation for a couple of months at the start of the year. The way Nick Cave has matured into an artist who so fully and completely inhabits his own unique space, embodying his mode of operation, delivering time and time again on the foundation he and his band have built for themselves, seems to me to be one of the wonders of the musical world. File him alongside Tom Waits and… erm…

‘Push The Sky Away’ is a perfect example, wherein he does things he’s never done before, taking a further step away from the swampy wild west and finding himself amongst sex-traffickers, sailors and theoretical physics wonks. Definitely the best album of the year to feature one song which opens with a description of the narrator completing the composition of one of the album’s preceding tracks.

A dizzying blend of sounds lifted magpie-style and blended with abandon by this Danish four-piece. Even if by some miracle the individual tracks manage to hold their disparate influences together, there’s no way this should work as a coherent album. Somehow it does.

When ‘MVotC’ arrived it was trailed as the musical equivalent of a Thomas Pynchon novel, cramming in countless allusions, allegories and hints of hidden histories. I still haven’t sat down with the lyric sheet, but I know this is a smart piece of work. In fact, I think it’s the sort of record we should be hoisting shoulder-high and showering with garlands.

When so much alternative rock has been lauded for disengagement, dislocation and blurring out, or for just doing more, longer and with less focus, Vampire Weekend have produced a work of scope, substance and, crucially, concision. It crackles with energy and melody, rejoices in musical flourishes, stylistic invention and lyrical density, and pulls all these together into a whole which is as playful as it is intriguing, which will move the feet as much as it spins the head.

Talking Heads ascended to the firmament for doing something similar, for daring to aspire to being smart as well as musically gripping. It genuinely baffles me why we aren’t rushing to put Vampire Weekend up there with them.

My record of the year, you ask? That would be ‘Coexist’ by The xx. But that’s another story.